What happened to retail real estate? Top of Mind Series

Episodes » Top of Mind Series: What Happened to the Retail Apocalypse?

What’s actually going on with retail real estate? For years, we’ve been seeing headlines declaring that retail real estate is dying, and e-commerce will win. We dive into some charts from a recent presentation we saw from a well-know real estate economist. The findings are illuminating! On this mini-episode series, Bob and Ben dive into the data behind the narratives, looking at timely data, important economic findings, macro trends, and other important topics for investors. On the Top of Mind Series, we share bite-sized insights into a timely or trending topic.

What Happened to the Retail Apocalypse?

One of the things that we wanted to talk about is something we’ve been hearing a lot about at all the different real estate conferences we’ve been going to, in different podcast episodes that we’ve been having, and it just seems like it’s everywhere. I know it’s not, but it’s just wherever we’re at we keep hearing this and it’s all about retail real estate. When we say that, there’s generally two very polarized responses, where retail is dead, the apocalypse has happened, and e-commerce is going to take over brick-and-mortar retail. The other side of it, well, maybe there’s opportunity. One of the great quotes from Warren Buffet is, “When there’s blood on the streets, when everyone’s scared, that’s the best time to be looking.”

Oh, I mixed … What’s the one from Warren Buffet?

Broker and he said, “Bob, the best opportunity right now is in retail.” We’re actually going to look at some of the retail here so, Ben, go through these charts.

Yeah, and just full disclosure, we 100% stole these charts from a great presentation we saw at the Best Ever conference a month or two ago by Spencer Levy, who is a well-known economist. He’s talking about all the different asset classes in retail is where he’s saying, “This is where the opportunity is. This is where investors need to be looking because it’s not very often you see the opportunity like this.”

Here’s a couple charts. We will recommend that if you’re listening, we’ll try to describe them, but if you have a chance to go back and watch it on YouTube, that’s going to be really helpful because we are referencing charts as we do this. This first one is called, “Is the retail apocalypse, is it still here? Is it going to completely eradicate all retail real estate?” What we’re seeing here on this chart is the percent of total retail sales that is being made online, so from e-commerce. We’ve been seeing over the last really decade, the amount of purchases made online is substantially increased, but really a year or two years ago, it spiked and then it’s really plateaued, and it hasn’t really done anything. In fact, it’s actually gone down. It’s been plateauing right around 24, 22% of total sales being made on e-commerce.

That the trend is definitely slowed and what we’re seeing and where a lot of investors, in the conversations we have, is the whole retail apocalypse has kind of been overplayed. It’s this big headline that is really easy for the news channels to promulgate, retail is dead, but there’s certain types of retail that is not dead. There’s certain types of things that you can’t get online. What are some of those ones?

Yeah, so what this chart shows, it shows steady increase for years. This is the share of pure e-commerce retailers eating into taking the total e-commerce pie and steady increase, huge spike in COVID, and then it’s been a falling off and plateaued. We’re actually seeing that, the e-commerce sales has actually been slowing recently.

Show to the next slide.

Yeah, so this one was pulled from literally just a couple days ago, a big article on CNBC. Obviously the stock market’s been struggling this year, 2022, and especially e-commerce stocks. They’re they’re plummeting because e-commerce transactions, if you can see here on the highlighted part of my screen, have declined 1.8% year over year. E-commerce sales actually declined.

Again, there’s this part of retail where people, one, there’s maybe a big push coming back from COVID people be out in person again, but there’s also, there’s these irreplaceable type of businesses that can’t be fully replaced by online sales.

This is a chart, “US Retail Sales Are Resilient.” This is total retail sales, both e-commerce and in person, and you can see here really since the beginning of 2020, a pretty big growth trend in total sales. There’s been very healthy appetite, we have other charts we’ve seen not in this deck, but other charts we’ve seen where a lot of retail actually did really well through COVID.

There’s certain retailers that did not, and we’ll talk about that as we go on, as we see it-

Yeah. There’s a lot of strong demand. Obviously, we said on many podcasts before, the GDP, the gross domestic product of the US is made up 70% by consumer spending. A healthy consumer, a strong consumer that’s spending, is very good for the economy and we’re seeing that right now. There’s a lot of opportunity there.

This next chart is, “Investors Are Seeing Opportunity.” This is the capital markets for retail real estate over the past about three years. We’re seeing the last really two quarters, Q3 and Q4 of 2022, a pretty big increase in transaction volume in retail real estate. This is the big money. These are big investors that are seeing these trends and wanting to capitalize on it. Again, Invest Like a Billionaire, the whole point of this podcast is to do what the ultra wealthy, the billionaires of the world, are doing, the smart money, and they’re definitely seen some opportunity here.

And we’re seeing this too. We’re actually about to add to this chart and piling in, just the latest deal we’re looking at. If we’re going to buy a multi-family value add deal, right now, we’re going to pay a three and a half cap for that.

Yeah, we were calculating earlier today. On a property that says earns a million dollars of NOI, at a three and a half cap to purchase that, we’re going to be paying close to $30 million to get the right $1 million.

The same level of earnings in retail, I’m paying $10 million. Instead of $30 million, I’m paying $10 million for this. It’s on sale. Retail is on sale and literally is earning at a 10% rate. When something is like that, you can tell just how hated it is. I want to be buying stuff that’s hated. I want to be buying stuff that is on sale, that no one wants, but there’s nothing wrong with it.

It’s especially exciting when you’re seeing the fundamentals supporting this as well.

Because it’s purely headlines and it’s people that are not seeing the opportunity.

That was the one.

But, but it’s being contrarian. It’s being smart contrarian investors. That’s how Buffet has made all his money. He’s seen opportunity that people have not seen right, capitalized on it in a big way.

This last chart’s really interesting because this is breaking down the different types of retail and one that a lot of people may be familiar with or the one that trades at the lowest cap rate or would be considered maybe the lowest risk is grocery anchored.

Makes sense. These is retail where there’s a grocery store, so people have to go. That’s trades at, it’s showing here a five or a five and a half cap rate.

Right. This definitely in the lower range, maybe even in the more classy multi-family range, but what Spencer Levy and other economists we’ve heard are making the point is this is actually the most susceptible to being e-commerced.

If you want to call it that.

Is it possible that you’d order your groceries online and the answer is yep.

Absolutely, yes. My wife has started doing that more and so the other chart here on this page, you can see is that the estimated grocery e-commerce sale, so the amount of groceries that are going to be purchased online is forecasted to grow pretty substantially over the next few years. It’s already been growing a lot and this is where a lot of people are seeing where e-commerce still has running room, where it has some ability to continue to eat into the brick and mortar.

We’re not super excited about the grocery anchored because of this trend that we’re seeing. We love more the the neighborhood retail, where these are the bread and butter businesses that are really close to residential housing, that are needed, that are things you can’t get online, some of the things that Bob mentioned, and something that we’re super excited about. Again, this is one of our Top of Mind series on the podcast. We’re going to be sharing nuggets, hopefully every week or every other week when we can find a good chart to break down and a good trend that we’re seeing and that we want to highlight to our listeners. Thanks so much for listening, be sure to check in for future episodes, and here’s to your success. 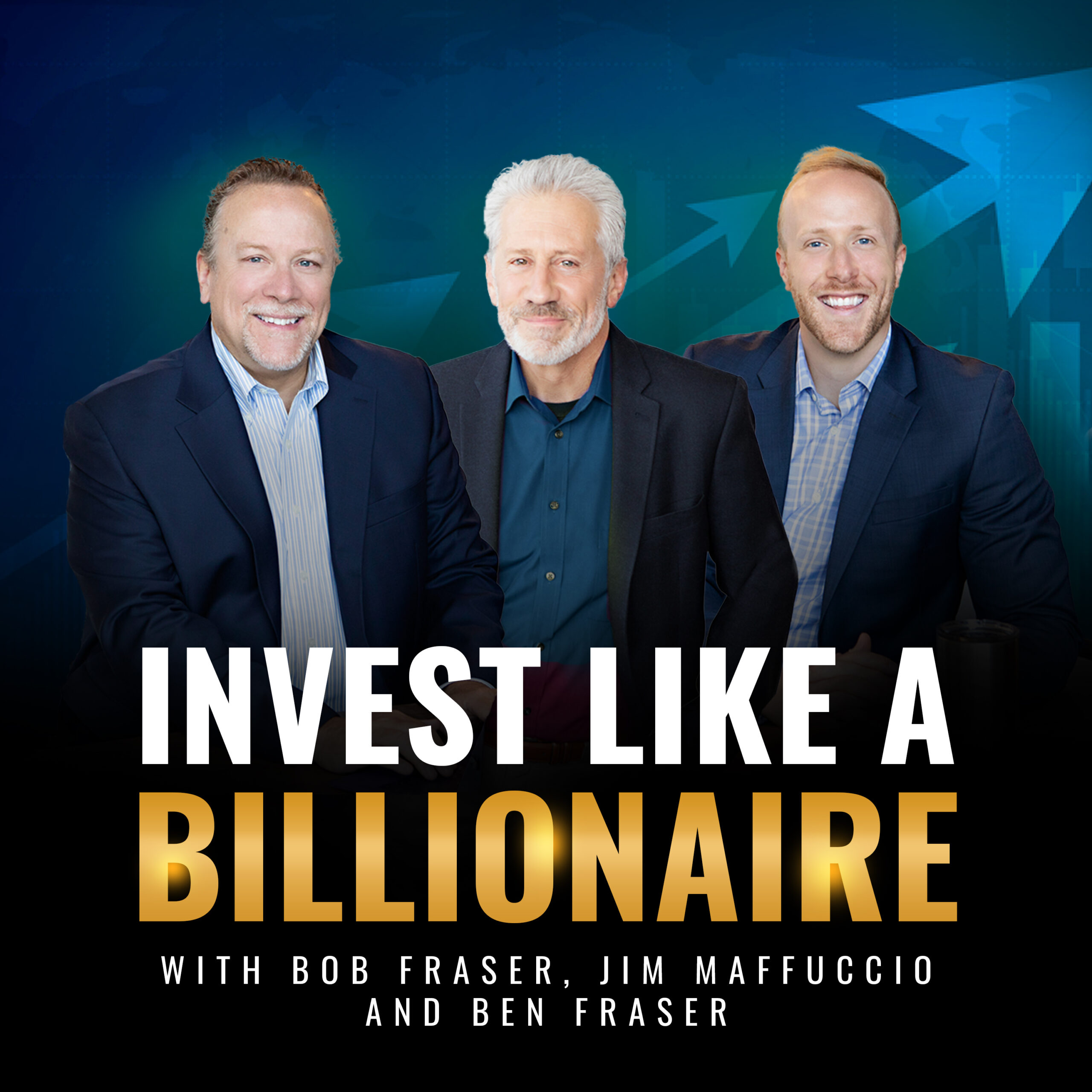